A Basic Introduction to the C Language – #1

When I find my code in tons of trouble,
Friends and colleagues come to me,
Speaking words of wisdom:
“Write in C.”

As the deadline fast approaches,
And bugs are all that I can see,
Somewhere, someone whispers:
“Write in C.”

I used to write a lot of FORTRAN,
For science, it worked flawlessly.
Try using it for graphics!
Write in C.

If you’ve just spent nearly 30 hours
Debugging some assembly,
Soon you will be glad to
Write in C.

This series of tutorials will provide a short and practical introduction to the C language. At the end of this tutorial, you will be able to write simple programs that can read data from files elaborate them and write the results of the calculations in output files. This tutorial is not a course in C programming language, therefore the motivated readers are encouraged to look for more comprehensive introductions to this language. Good books are the followings:

In this first part of the tutorial, the following basic features of the C language are explained with progressive examples:

The short program, described in Figure 1, calculates the Lennard-Jones (LJ) potential that it given by the following equation:

of two argon atoms at a distance x=0.5 nanometers and print out the result on the screen.

Finally, runs it from the command line typing: ./prog1.exe

The program comprises 7 sections as indicated in the callouts in Figure 1. 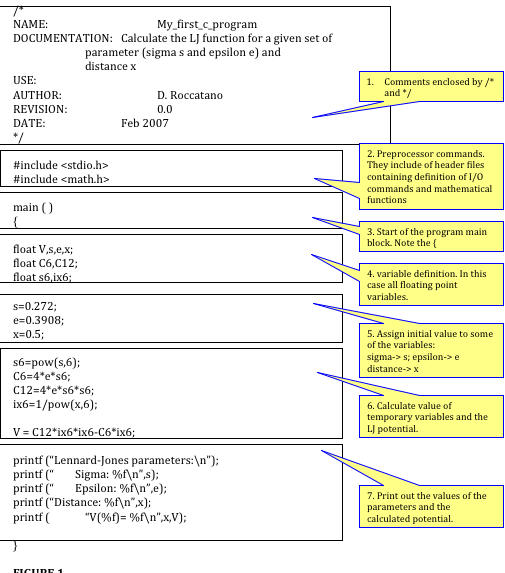 Figure 1: Example of C program. The program calculates the value of the Lennard-Jones potential for a given distance between the particle.

Section 1. Comments are extremely useful to understand the program. Put always efforts to comment your program! Otherwise, it will be very difficult for another user (and probably also for you in few weeks!) to understand your program.

Section 2. Before compiling (e.g. transforming the human readable C language in binary code) the program is preprocessed to include external files, to declare machine specific instruction or to define macros. Statements for the preprocessor start with the symbol “#”. The two #include statements in our program request to the preprocessor cpp the inclusion of files containing the definition of I/O and math functions, respectively.

Section 3. C language is organized in function and the program itself is a special function called main () that incorporate all the other functions.

Section 4. The values elaborated by the program are stored in variables classified according to types. Some of the variable types defined in the C language are reported in the Appendix. Each type occupies a certain quantity of computer memory. The integer in the range [-232,232] (for a 32-bit processor) are defined by the type int. The float type is used to assign floating point variables. Single precision floating point variables are defined using 4 bytes (32 bits in total) in the following way [1]:

If you need more precision in your calculation then you can use the double precision floating point variables defined using double statement. The char type is used to assign alphanumeric characters (A,b,%,&,$, etc.); it is the 1-byte variable type. Variables are normally elaborated using specific functions and with certain restrictions depending on the type. In the case of C, those limitations are sometimes very fuzzy and this can be a point of strength for an expert c-guru but also a dangerous weakness for absolute beginners!

Section 5. The defined variable needs to be initialized by assigning (using the = symbol) initial numerical and alphanumerical values.

Section 6. Using the numerical functions of the language (see a short list of them in the Appendix); it is possible to calculate complex mathematical expressions. In the case of the LJ function, we try to minimize the use of the function pow () and increase the use of multiplications. This has the advantage to improve the performance of the code in term of computer time.

The C language has a case-sensitive syntax, therefore let use lower case for writing the statements of the language. Take your time also to carefully test and debug your programs. Those are some examples of disaster that insidious bug of no fully-tested  program can provoke [2]:

The general form of the force generated by a Lennard-Jones potential interaction and acting on the atom i, is given by

For sake of simplicity, let consider only the mono dimentional case of two particles moving along the x-axis.

Every time you decide to calculate the potential for a new value of x, instead to modify the source code and recompile again, it is more convenient to input the new value from the keyboard. To accomplish this new task you need to use the function scanf (format, list of variables). The function scanf read a formatted input line and assign the line contents to a list of variables. The format specifier is reported in Appendix. This function will input the value of x from the keyboard every time you run the program. To use this new function, replace the assignment x=0.5, in program prog2.c, with the following lines and save the new program as prog3.c. Compile and run it.

Running every time the program to get a new value of x is also quite inefficient. It would be more convenient if you can calculate different values of the LJ potential without restarting the program. This can be done using a conditional loop. This statement allows you to repeat a program block until a given condition is fulfilled. Two types of conditional loops are available in the C language:

Modify the previous program by including the code in the following text box. Move in the body of the loop instructions present in 6th part of Figure 1.

The program will now prompt for a new x value after calculating the previous one. It will end when the value of x is equal or less than zero (condition x> 0).

Modify the program by implementing a while loop that performs the same task as the do-while loop.

Suppose that you would like to make a graph of an LJ potential V(x). In this case, you need to calculate the function at N different values of x. Performing this task inputting distances by keyboard and recording the results would be a tedious and frustrating task especially when you want to calculate V(x) for hundred points. Fortunately, a computer can perform much better and faster this work by using counting loops. A counting loop can be implemented by modifying the program 1 by using a conditional loop as follows:

The operator ++ and += are called unary operators since they operate on one variable only. The increment operator ++ is equivalent to the operation i=i+1. The operator += is equivalent to the operation x=x+inc. In the program, the while-loop cycle increments the value of i of one unit, and the value of x of Inc, until the value of i become equal to N, then the program will exit the loop. The new program needs as input: the starting value of the distance, the number of points and the distance increment. The only printf statement that should remain in the loop will print three column containing the value of the position, the potential V, and the force F acting on the particle at distance x.

The previous loop can be expressed in a more compact way by using the for-loop:

Try to implement both the loops and include also the possibility to input from keyboard starting distance value, distance increment and numbers of points. Write a modified version that requires as input the initial and final distance and the incremental value.

The syntax for a format placeholder is “%[flags][width][.precision][length]type“.

Where type can be any of:

Flags can be omitted or be any of:

Width can be omitted or be any of:

.Precision can be omitted or be any of:

If the precision is zero, nothing is printed for the corresponding argument.

Length can be omitted or be any of:

LOGICAL AND OTHER OPERATORS

NOTE: Be careful not to confuse EQUALITY a==b with ASSIGNMENT a=b. The latter set a equal to b while the former checks if a is equal to b.

TABLE I: LENNARD-JONES PARAMETERS FOR NOBLE GASES. Note that the values of epsilon are divided by the Boltzmann constant and therefore expressed as a temperature (Kelvin).

I have a Doctorate in chemistry at the University of Roma “La Sapienza”. I led educational and research activities at different universities in Italy, The Netherlands, Germany and now in the UK. I am fascinated by the study of nature with theoretical models and computational. For years, my scientific research is focused on the study of molecular systems of biological interest using the technique of Molecular Dynamics simulation. I have developed a server (the link is in one of my post) for statistical analysis at the amino acid level of the effect of random mutations induced by random mutagenesis methods. I am also very active in the didactic activity in physical chemistry, computational chemistry, and molecular modeling. I have several other interests and hobbies as video/photography, robotics, computer vision, electronics, programming, microscopy, entomology, recreational mathematics and computational linguistics.
View all posts by Danilo Roccatano →
This entry was posted in Programming. Bookmark the permalink.