Molecular Machines within us: The human neutrophil collagenase MMP8

Human neutrophil collagenase (HNC, MMP8) is one of the target enzymes for drug treatment of pathologic extracellular matrix degradation. Peptidomimetic inhibitors bind in the S-side of the enzyme active site occupying the S1 primary specificity pocket by their large hydrophobic side-chains. The crystal structure of the complex between the catalytic domain of MMP-8 and Pro-Leu-L-TrpP(OH)2(PLTP) showed that this phosphonate inhibitor binds in the S side of the active site. 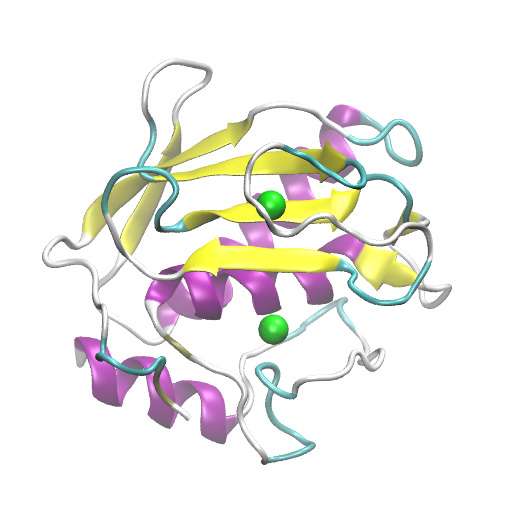 This finding was unexpected since it represents the first example of accommodation of the bulky Trp indolyl chain in the S1 rather than in the S’1 sub-site. We have therefore studied the dynamical and structural factors favoring this uncommon mode of binding [1]. MD simulations performed on the uncomplexed enzyme show that its structure in aqueous solution is only slightly different from the crystal structure found in the complex with PLTP. The results from the MD simulations, performed on PLTP alternatively interacting with the S- or S’-side of the active site, have shown that the enzyme fluctuation increases in both cases. The main contribution to the overall enzyme fluctuation is given by the loop 164-173. The fluctuation of this loop is spread over more degrees of freedom when PLTP interacts with the S-side. This dynamical factor can enhance the preference of PLTP for the S subsites of MMP-8. MD simulations have shown that ligation of PLTP in the S subsites is further favored by better zinc chelation, a cation-p interaction at the S3 subsite and unstrained binding conformations.

I have a Doctorate in chemistry at the University of Roma “La Sapienza”. I led educational and research activities at different universities in Italy, The Netherlands, Germany and now in the UK. I am fascinated by the study of nature with theoretical models and computational. For years, my scientific research is focused on the study of molecular systems of biological interest using the technique of Molecular Dynamics simulation. I have developed a server (the link is in one of my post) for statistical analysis at the amino acid level of the effect of random mutations induced by random mutagenesis methods. I am also very active in the didactic activity in physical chemistry, computational chemistry, and molecular modeling. I have several other interests and hobbies as video/photography, robotics, computer vision, electronics, programming, microscopy, entomology, recreational mathematics and computational linguistics.
View all posts by Danilo Roccatano →
This entry was posted in Research. Bookmark the permalink.