The effect of 2,2,2-trifluoroethanol (TFE) as a cosolvent on the stability of three different secondary structure-forming peptides, the Melittin, the Betanova, and the β-hairpin II from the bacterial protein GB1 (see the crystal structures in Figure 1), was studied using molecular dynamics simulations. 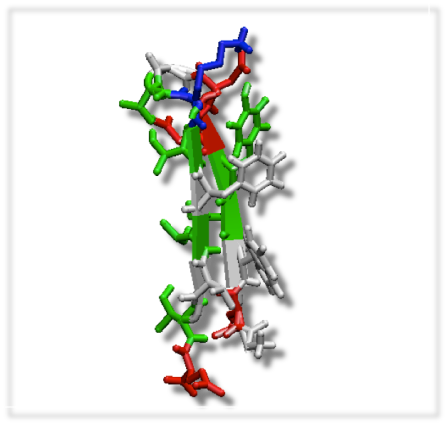 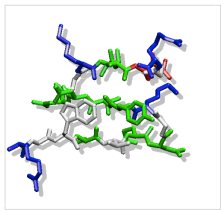 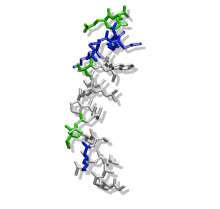 Figure 1: Crystal structures of the β-hairpin II from the bacterial protein GB1 (left), Melittin (right bottom), the Betanova (right up). The residues are coloured accordingly to their chemical properties.

The peptides have been studied in pure water and 30% (v/v) TFE water mixtures at 300 K. The simulations suggested that the stabilizing effect of TFE is induced by the preferential aggregation of TFE molecules around the peptides (see Figure 2) [2]. The coating displaces water molecules, thereby removing alternative hydrogen-bonding partners and providing a low dielectric environment that favours the formation of intrapeptide hydrogen bonds. Because TFE interacts only weakly with non-polar residues, hydrophobic interactions within the peptides are not disrupted. As a consequence, TFE promotes stability rather than inducing denaturation. 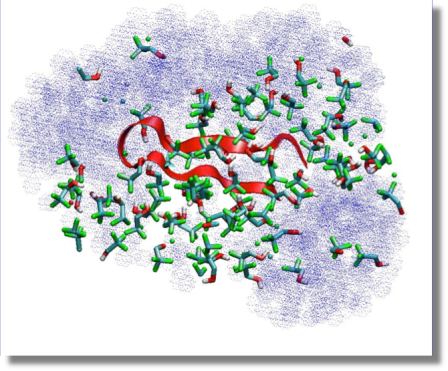 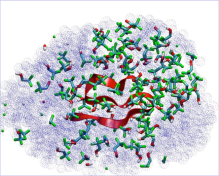 Figure 2: Snapshots from MD simulation of the β-hairpin II from the bacterial protein GB1 (left), Melittin (right bottom), the Betanova (right up) in mixtures of TFE/water [2]. TFE is shown as stick model, water as point clouds.

For the Melittin, the study was also extended to water solutions of the hexafluoroisopropanol alcohol. This fluorinated solvent is known to be a α-helix stabilizer even more effective than the TFE.  Our simulations showed on time scale of 100 ns a differential tendency to preserve the original crystallographic α-helical structure in the presence of the co-solvent (see Figure 3) [1]. Also, in this case, the molecular nature of the effect was related to the observed coating of the peptide by the co-solvent molecules that limited the accessibility of the water molecules to the backbone H-bond interactions and stabilized the hydrophobic residues on the peptide surface. 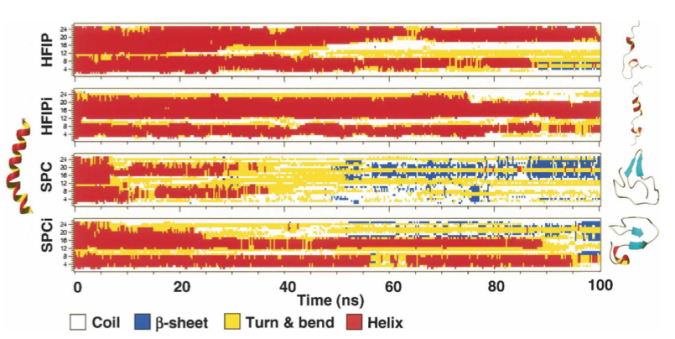 Figure 3: Secondary structure behaviour along the simulations of the Melittin in pure water and HFIP. The presence of HFIP molecules stability the initial crystallographic half helix conformation for at the least 100 ns [1].