The confinement of primeval biochemical compounds by nano compartmentalization made possible the spatial and temporal control and the development possible the most complex chemical process: the life. Learning from Nature, we have developed artificial nanomaterials that imitate the properties of natural vesicles for confining chemical of different nature and purpose. For example, the vesicles made of block copolymers (so-called polymersomes) can be designed to match applications that demand mechanical stability, non-natural conditions (e.g. organic solvents), substrate and product tolerance, and permeation resistance. All these specifications are normally out of reach for vesicles made by lipids. These properties can be readily obtained by changing the length and nature of the blocks in the copolymers, altering in this way the amphiphilicity, and the aggregation properties.

Polymersomes are useful nanodevices for applications where molecular segregation and transport (for example drug delivery systems). However, only when it is also possible to control the flux of matter in and out of these systems that the functionality of a biological container is also reproduced.  Such nanodevice is called Synthosome and it is composed by a polymersome contained embedded in his polymeric membrane a protein channel modified for controlling in and out flux of molecules. Differently by normal polymersome in which the diffusion of substrate and product molecules occurs through the polymer shell, the block copolymers of synthosome must prevent the penetration through the polymer shell of compounds. The main advantage of synthosomes over polymersomes is that, through protein engineering, it is possible to design functionalized protein channels. A protein channel that can be opened and/or closed on demand offers opportunities for the design of functional nano-compartments with potential applications in synthetic biology (pathway engineering), medicine (drug release), and industrial biotechnology (such as nanoreactors, multistep syntheses, bioconversions in nonaqueous environments, and selective product recovery).

The FhuA, Ferric Hydroxamate Uptake protein component, is one of the best-studied protein channels and also exploited in protein engineering applications. It is a large monomeric transmembrane protein of 714 amino acids folded into 22 antiparallel beta strands and made up of two domains. Crystal structures of FhuA have been resolved (PDB code: 1BY3) and a large passive diffusion channel (FhuA D1–160) was designed by removing a capping globular domain (deletion of amino acids 5–160), see Figures below.

FhuA with the cap domain show as surface.

This engineered variant has a wide channel that allows even the translocation of single-stranded DNA. IN the Figure, the FhuA1-60 is view along the channel from the larger opening side (cytoplasmic side) by applying a clipping plane to evidence the size of the opening at different positions along the channel.

In a study in collaboration with the group of Prof. U. Schwaneberg, a synthosome reduction-triggered release system with an engineered and chemically labeled FhuA D1– 160 channel has been developed and validated by analyzing the calcein release. Two labeling reagents of different sizes have linked to the exposed lysine side chains shown in Figure 1.

Figure 1: Crystallographic structure of the FhuA D1–160 based on the PDB structure: 1BY3.

In Figure 2, a model of the protein labeled with the 3-(2-pyridyldithio)propionic-acid-N-hydroxysuccinimide-ester, the shorter labeling reagent is shown. 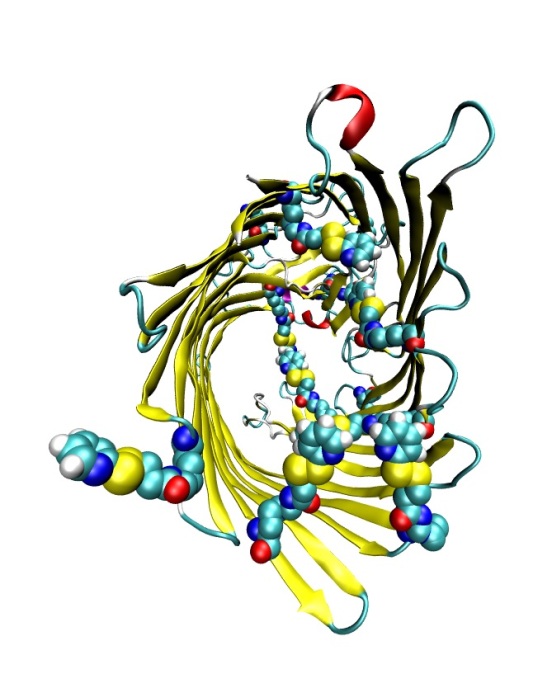 Figure 2A: Model of FhuA D1-160 with lysine amino acids modified by the pyridyl-containing fragments.

In Figure 3, a model of the protein labeled with the 2-[biotinamido]ethylamido)-3,3′-dithiodipropionic acid N-hydroxysuccinimide ester, the shorter labeling reagent is shown. 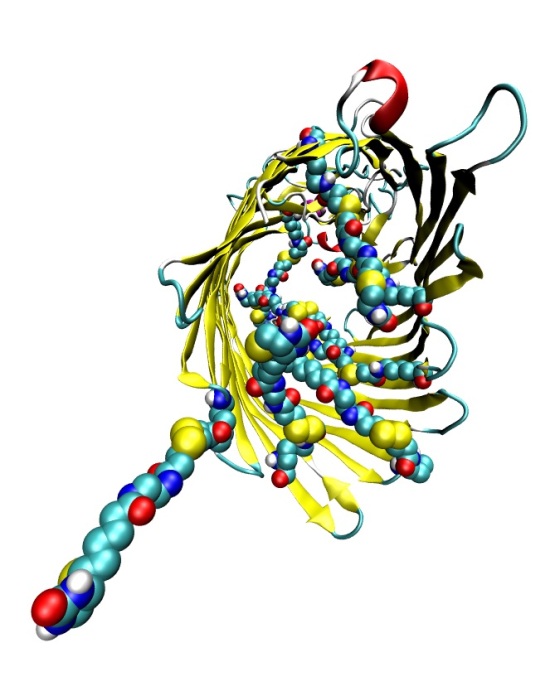 The release kinetics of calcein were strongly modulated by the size of the lysine-labeling reagents. In general, such on/ off switches would be of high value for controlling and modulating cellular biosynthetic pathways and might become attractive for applications in the pharmaceutical and/or chemical industries.