Introduction to the PERL Language

PERL is an acronym for Practical Extraction and Report Language. This scripting language was initially developed by Larry Wall with the intent to extend the potentiality of the awk and sed program for text manipulation and for Unix system administration tool. It takes the best features of many other languages, such as C, sed, and awk. In addition, Perl supports both procedural and object-oriented programming. Perl is the most popular web programming language due to its capability with text manipulation and rapid development cycle. The same capabilities began a precious support to bioinformatician to data mining the rapid accumulation of a large amount of genetic information from the molecular biology research.

These are notes from a course on Bioinformatics that I taught at the Jacobs University Bremen (Germany) in 2009. This introduction is far from being comprehensive but it gives you some guidelines to start a simple use of this sophisticated scripting language.

What can you do with Perl?

Perl is a complete programming language that combines the capability of traditional compiled languages with ad hoc tools for parsing text. It is supported by a huge amount of libraries that extend its capability for specific applications. For the purpose of this book, some examples of capabilities are reported in the following list.

Getting start with Perl programming

the language interpreter is called using the command Perl followed by flags that specify the mode in which the language is executed.

Among the important flags these three are the most commonly used ones:

-e : direct execution (command line as in the example) of the Perl commands

A Perl program saved in a file can be executed by typing the command:

The file can be made self-executing by adding the line

at the beginning of the program and making the file executable using the command chmod (see my article on Unix). In Figure 1 a simple example of self-executable Perl script is reported.

The program starts with the definition of variables in which store the information elaborated by the program. Being PERL a not declarative language this means that variable could be defined in the moment of the first one and the kind of variable is automatically assigned by the contents. However, it is good programming practice to declare the variable at the beginning. This habit can keep the program well structured, and it is very useful to easily debug it. After the variable assignment block usually follows an input block gathering data from external devices as keyboards or hard disks. The program block is the part the perform the data elaboration. The part of the program can be structured in subroutines or functions that perform specific tasks. The last block is the output where the elaborated results are printed, stored or represented graphically on the screen. The program can then return back to the program block or terminate.

Scalar variables are defined using the symbol $ in front of them. Perl does not need a declaration of the variables but it is always good practice to declare variables at the beginning of the script. This help to take track of the variables used in the program.

For example, the simple scalar value “aminoacids” is defined as

and to assign the value of 20 to $aminoacids you can write:

The arrays are defined using the symbol @ at the beginning of array name. For example, an array containing the names of the amino acids is defined as @aminoacids.

The 5th element of this array is then given by

the ‘Ala’ value from hash %aminoacids:

the last index of array @aminoacids:

PERL has many built-in global scalar variables, and they are very important. One of the most important is $_, the default scalar variable. The following functions and operators work with the $_ variable if you do not explicitly specify the scalar variable on which they are to operate.

CAVEAT: Perl has a very flexible syntax and you can play with it writing codes that are impossible to read by other people or even by yourself after few months. In Figure 3, an extreme example of obfuscated code that can still work is shown. This is one of the many example winner codes of the PERL obfuscated code contest. 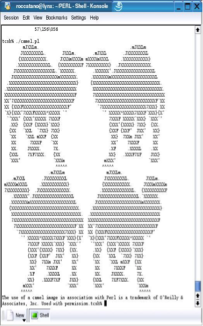 Figure 3: The Camel code: an example of a PERL obfuscated program. The source code of this example (and many others) can be found here.

Therefore do not obfuscate your Perl scripts but get used commenting it!

In the following Table, a list of Perl operators is reported together with some example of usage.

Table 1: Some example of mathematic operators.

In this example, a simple program for calculating the roots of a 2 nd order algebraic equation is shown. The program also uses the built-in mathematical square root function: sqrt().

A string is a scalar value in Perl, unlike other languages like C. This means you can store a string in a scalar variable. Perl has built-in operators on strings. There are also many built-in functions on strings in Perl.

Table 2: Some example of string operators.

In this example, two string sequences are assigned and printed using the concatenation, interpolation operators.

This example uses the command reverse to reverse a given string and check if it is a palindrome. It can be used to check a word or a sentence but also nucleic acids or amino acids sequences.

If you want to input the  word directly from the keyboard then you can use the commands:

to read the string in $in and eliminate the newline  (\n) character at the end of it.

PERL contains many commands for the manipulation of the string of characters. Two useful ones are index() and substr(). The first one finds in a given string the occurrence of a substring and returns the occurrence in the first one of the first character of the second one. In the following list of examples, it is shown how to use the two commands to find substrings in the following sequence of characters:

Let consider the array @aminoacids. We can assign the elements of the array in these different ways:

The single element in the array can be accessed as $aminoacids[0], $aminoacids[1],… $aminoacids[n]. Note that the indices start from 0, not 1. In this case, $aminoacids[0] contains “Ala”.  It is possible to copy a subset of the array to another array using the so call slicing operation.

As for the strings, there are many built-in functions that can be used to manipulate arrays. The command  @flds=split  is equivalent to  @flds=split(/\s+/,$_) and it is used to separate the fields in the default variable $_  (that is the same as $s in this case) between spaces and stored the resulting fields in the array named flds.

These are examples for splitting at different separator characters:

The following built-in function perfrom other common operations with arrays The function shift can be used to extract from the array the left-most element:

The function pop can be used to extract from the array the right-most element:

The function unshift insert an element from the left:

The function push insert an element to the right:

This statement can be used in different forms:

unless is the opposite of if

The iteraction in PERL can be executed using a pletora of loop statments:

and the Loop can be controlled using the staments:  next, last, continue, redo

In this example, the contents of each element of the array $arr is incremented of one.

This loop performs the same action as in the previous example.

The statements while and do-while

The syntax of the command  is:

The statements until and do-until

The syntax of the command until is:

The syntax of the command do-until is:

BREAKING AND CONTINUING LOOPS: the last and next commands

This program request entering an amino acid sequence. Then it performs a statistical analysis of the occurrence of single amino acids and writes the output as distribution histograms.

How to replace characters into a given sequence

with the Substitution Command Options (SCO)

with the Substitution Command Options (SCO):

These tasks can be simply accomplished using the command  (tr)

with the help of the translation Table 1.

A pattern is a sequence of characters to be searched for in a string. A pattern is defined using the regular expression. In Perl, patterns are normally enclosed in slash characters: /def/. The pattern matching is performed using the special operators: =~ and !~ in this ways:

If the input is read from standard input or from the file(s) specified on the command line the following syntax is used.

For the standard output, the file handler STDOUT is used. STDOUT is the default, therefore you do not have to specify it.

Prints a sequence in FASTA format to the standard output (usually the screen).

Perl variables with the list of the command line arguments

Use it if you want to read from a file not given on the command line or want to write in the file different from standard output one (>).

sample dna | (This is a typical fasta header.) agatggcggcgctgaggggtcttgggggctctaggccggccacctactggtttgcagcggagacgacgcatggggcctgcgcaataggagtacgctgcctgggaggcgtgactagaagcggaagtagttgtgggcgcctttgcaaccgcctgggacgccgccgagtggtctgtgcaggttcgcgggtcgctggcgggggtcgtgagggagtgcgccgggagcggagatatggagggagatggttcagacccagagcctccagatgccggggaggacagcaagtccgagaatggggagaatgcgcccatctactgcatctgccgcaaaccggacatcaactgcttcatgatcgggtgtgacaactgcaatgagtggttccatggggactgcatccggatcactgagaagatggccaaggccatccgggagtggtactgtcgggagtgcagagagaaagaccccaagctagagattcgctatcggcacaagaagtcacgggagcgggatggcaatgagcgggacagcagtgagccccgggatgagggtggagggcgcaagaggcctgtccctgatccagacctgcagcgccgggcagggtcagggacaggggttggggccatgcttgctcggggctctgcttcgccccacaaatcctctccgcagcccttggtggccacacccagccagcatcaccagcagcagcagcagcagatcaaacggtcagcccgcatgtgtggtgagtgtgaggcatgtcggcgcactgaggactgtggtcactgtgatttctgtcgggacatgaagaagttcgggggccccaacaagatccggcagaagtgccggctgcgccagtgccagctgcgggcccgggaatcgtacaagtacttcccttcctcgctctcaccagtgacgccctcagagtccctgccaaggccccgccggccactgcccacacacctgagccactctcagatgaggaccta

Note: $/ and $\ are built-in global variables what defines the input and output separators. The default value of $/ is “\n”.

This code snippet prints the following:

This example shows how to use the printf command to write a  formatted PDB file.

A hash is essentially an array except that is indexed by user-defined keys rather than by nonnegative integers. A hash should be used, instead of array, when one wishes to set up a lookup table to store key-value pairs. Entire hashes are denoted by ‘%‘.

Example of the use of Hash Arrays

A section of a program that performs a particular task. The term subroutine is synonymous with procedure, function, and routine.

Local variables in the subroutinesare defined using the statement:

If correctly typed, the program should output the following message:

I changed all the A’s in TTTT and got TTTT !

The argument being passed in is $DNA; the result is saved in $cDNA

To pass a parameter by reference, you have to preface the name of the parameter with a backslash. \@i is a reference to array @i. In the subroutine, $i gets the value of \@i. So it is also a reference to array@i. When argument variables are passed in this way, changes in values of the argument variables in the subroutine also affects the values of the arguments in the main program.

I have a Doctorate in chemistry at the University of Roma “La Sapienza”. I led educational and research activities at different universities in Italy, The Netherlands, Germany and now in the UK. I am fascinated by the study of nature with theoretical models and computational. For years, my scientific research is focused on the study of molecular systems of biological interest using the technique of Molecular Dynamics simulation. I have developed a server (the link is in one of my post) for statistical analysis at the amino acid level of the effect of random mutations induced by random mutagenesis methods. I am also very active in the didactic activity in physical chemistry, computational chemistry, and molecular modeling. I have several other interests and hobbies as video/photography, robotics, computer vision, electronics, programming, microscopy, entomology, recreational mathematics and computational linguistics.
View all posts by Danilo Roccatano →
This entry was posted in Programming. Bookmark the permalink.

1 Response to Introduction to the PERL Language